Boxing is back! Top Rank have spent the last couple of weeks reminding us, in case you might be in danger of forgetting. It’s not so much Lampley, Merchant and Jones on HBO, but more Fish, Chips and Scraps on Spike or Frank Maloney on Loaded TV as Bob Arum’s premier Stateside outfit rush to fulfill contractual obligations with their ESPN broadcast partner.

First up, on June 9, was WBO featherweight champion Shakur Stevenson, competing in a non-title 10-rounder against little-known Felix Caraballo. An underwhelming yet completely understanding relacement, after Miguel Marriaga and Rafael Rivera were both unable to attend, Caraballo was chopped down and bagged up in round six as Shakur ruthlessly hunted the body.

Comparing Stevenson to the imperious Floyd Mayweather is unhelpful. Floyd was one of a kind, a once-in-a-generation talent. To even come close to matching Mayweather’s roster of work would be a massive achievement. Hype merchants like Tim Bradley or the grandaddy of boxing’s fireside yarns, Mark Kriegel, should step aside and let Shakur naturally develop in to his own man.

“Everything about this fight week was different. After my last fight was canceled, I was happy to showcase my skills for all of the boxing fans,” said Stevenson, improving to 14-0 with knockout number eight.

“He hit me with a couple shots, more than I’m used to, a couple jabs here and there. He was a tough guy, but I felt great in there after my training camp in Houston.”

Taking place in a sterile bubble portion of the MGM Grand in Las Vegas, the rest of the card was an exercise in caution. Tame mismatches over shorter distances were probably designed to avoid any blood-and-guts spectacles. Bodily fluids flying around the ring over championship distances would give off a bad look.

Next up on the schedule was former world champion Jessie Magdaleno. To think that this man once beat Nonito Donaire seems like a weird anomaly now, given how far his career prospects have drifted.

With all footage displaying the now-customary images of fighters, staff and corner teams slinking around weigh-ins and fight nights with personalised face masks, looking like they were ready to hold-up a newsagent, it was opponent Yenifel Vicente who tried most to circumnavigate the rulebook.

At the end of a scrappy 10 rounds, veteran referee Robert Byrd decided that his patience with the underdog had finally run out and the third man disqualified Vicente who had spent the majority of his 30 minute endevours building up an accumulation of fouls and low blows. Magdaleno looked good in patches, knocking Vicente down twice and enhancing his record to 28-1.

Now up in weight, the winner wants WBC 126-pound king Gary Russell. Given the fact that Russell barely fights once a year, Jessie may have to look elsewhere for opportunities.

The relative mediocrity continued in the village bubble on June 16 as WBO number one bantamweight contender Joshua Greer lost over 10 rounds to “Magic” Mike Plania. The Filipino knocked down Greer twice and, despite a late onslaught, held on to win a majority decision.

It was an upset of sorts. Greer, however, was never really anything to shout about, and the WBO’s relationship with Bob Arum no doubt aided his lofty ranking.

“This win is going to change my life,” Plania remarked. “I thought I could knock him out after the knockdown in the first round, but he was tough and adjusted his strategy.”

Former world champion Antonio DeMarco -now being used as a gatekeeper- helped ease prospect Giovanni Santillan to the next level over 10 rounds.

Keep an eye out for middleweight prospect Nikoloz “The Experiment” Sekhniashvili (for the nickname alone) who moved to 6-0 on the undercard.

The fights were flowing thick and fast by the time Gabriel Flores entered centre stage for the first time, against Josec Ruiz. Reared on the tough streets of Honduras, veteran campaigner Ruiz was tough enough to lose by 11 points on all three cards, by way of 10 shutout rounds and a second round knockdown.

This was all about Flores and how he dealt with being the main man after the original headline attraction was scrapped. Jose Pedraza had been due to box Mikkel LesPierre in what was one of the more intriguing comeback bouts of boxing’s tentative return, post-Covid 19. LesPierre’s manager tested positive and the bout was canned.

On the Flores undercard, Clay Collard pulled off a shock by defeating David Kaminsky over six rounds. Collard showed that despite his limitations in ability, fit and ready fighters may well flourish over the next few months.

Current world champion Emanuel Navarrete keeps busy up at featherweight on Saturday evening against Uriel Lopez who has 13 losses and 13 wins on the slate. Sports fans worldwide are apparently starving for action.

The fights that have been served up so far, mixed with what has already been promised over the coming weeks, may well test the veracity of that sentiment.

All photo and image credits: Top Rank and Mikey Williams 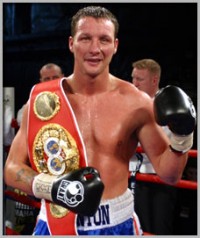