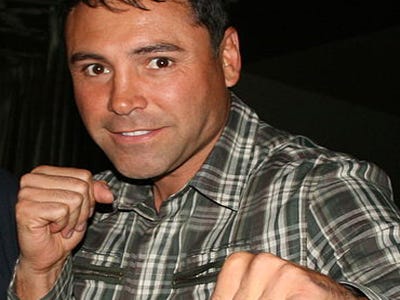 I’ve always been a massive Oscar De La Hoya fan. During a 16-year career his enthusiasm to constantly fight the best, win or lose, stood out like a sore thumb in boxing’s repetitive dance of duckers and divers.

In 2004 I travelled to Las Vegas to witness Oscar’s audacious attempt to wrestle the WBC, WBA and IBF middleweight titles from Bernard Hopkins. De La Hoya and Hopkins are now friends and business associates. Back then it was strictly business.

For a man who started off his career at super-featherweight, De Le Hoya had no place competing at 160. The “Golden Boy” had been lucky to squeeze past WBO champion Felix Sturm when he first tested the water some three months prior to the Hopkins bout.

On any other night Sturm would have deservedly retained his belt. However, having already seen Hopkins win earlier in the evening against Robert Allen, with such a big future event riding on Oscar getting the win over Sturm, it was with an inevitable roll of the eyes that De La Hoya took the title by three identical scores of 115-113. Sturm headed back to Germany with no title but great credit in the bank for his performance.

Hopkins breathed a sigh of relief. The officials had guaranteed him the big pay day that a fight with Oscar De La Hoya always generated. Oscar himself was the most relieved man in the MGM Grand.

Bernard Hopkins was much bigger than De La Hoya

When they eventually met, Hopkins stopped De La Hoya with a body shot in the eighth round. Despite some flashes of hand speed that excited a pro-Oscar crowd, he was too small for B-Hop and the veteran’s size and quality won through.

Tucked away in the nosebleed section, I was so far back that I could barely see the final punch landing. A fellow reveller, sensibly armed with a pair of binoculars, later suggested that the loser had thrown the fight. I didn’t buy that then and I don’t buy it now. For all of his faults, quitting wasn’t Oscar’s style.

While I still don’t believe a man of Oscar’s ring pedigree would attempt to explicitly throw fights, there have been numerous dubious incidents, increasing as the years go by. Stories of current and past infringements concerning De La Hoya have taken the glean off his golden persona.

Oscar’s struggles with substances are well documented. The darker side of his interactions with women occasionally flare up, with fresh accusations and tales from yesteryear floating in and out of the public realm.

The infamous photographs of his personal activities away from the media glare are used by boxing rivals as a continuous beating stick.

As I write this, De La Hoya enjoys a sizeable personal fortune and operates under a lucrative contract with TV sports outlet DAZN. Yet his public relationships with some of his prize assets (notably Canelo Alvarez and Ryan Garcia) draw constant scrutiny. Golden Boy shows are starting to reappear, as are Matchroom USA events, with promoters scrambling to catch up with Top Rank’s post-virus lead.

How much control does he have of his business, of his fighters, or of himself? Are the likes of Eric Gomez and Bernard Hopkins keeping things running smoothly? Was the much-maligned Richard Schaefer truly a major brain behind the organisation?

Recently a friend of the Boxing Asylum, Aymz, caught up with Alfonso Gomez. Despite effectively ending the careers of two great fighters in the form of Arturo Gatti and Jose Luis Castillo, Gomez could never catch a promotional break, especially with De La Hoya’s Golden Boy entity.

Despite holding a sketchy record on paper, Mexican Gomez was a solid operator who always came to win while fighting a host of recognisable names across his professional career. He even managed to fit in a successful run through NBC’s Contender series in 2005.

Despite his talents and reputation Gomez was always the bridesmaid when it came to matchmaking and he could never quite nail down that exclusive promotional contract. Boxing is a perennial blame game and the Guadalajara native believes there was one major factor stunting his professional progression.